5 Advantages of Moisture Scanning and Leak Detection With Drones

Property inspections are just something you have to do from time to time. They help you prevent problems, and catalog issues before they can grow out of hand into something that’s more difficult (and more expensive) for you to fix. However, if you’re worried about moisture and leaks in your buildings, then you should consider using a drone service to inspect the nooks and crannies.

Why use a drone for such a routine task? Well, since you asked…

Advantage #1: Drones Save Time, and Energy

Conducting a full inspection of a property takes a lot of time, and a lot of effort. You have to walk every hallway, get up on the roof, climb ladders, and go through all sorts of rigmarole. Drones, on the other hand, can fly quickly, covering all the necessary ground in a fraction of the time. There’s also a significantly smaller amount of physical exertion, according to Drone Vision, as these drones can be operated from the ground, saving inspectors perilous climbs. There’s no need to physically put an inspector into a location, because they can simply see through the drone’s eyes, directing it whenever they notice an issue.

It’s possible to attach high-resolution cameras to drones, allowing them to capture crystal-clear images that are far better than anything the human eye could capture in terms of clarity and sharpness. However, as Online Sciences points out, we can also attach other tools that make property inspections significantly easier, as well as more helpful. Infrared cameras can often detect minute leaks that would be difficult to spot if you weren’t exactly sure what you were looking for, as an example, and it’s possible to use other forms of detection equipment to find where problems are just getting started.

Property inspections have the potential to be hazardous. While walking around the ground level of a building is not that big of a deal, climbing ladders, scaling towers, and walking along rooftops that might be experiencing leakage and weakening certainly is a risky endeavor. And it’s one that the use of a drone can make significantly safer. Since drones fly, they can skim along a building’s walls, and out over areas that would otherwise be deemed too much of a safety risk, allowing inspectors to get views and angles that would otherwise be impossible. Hence why drone roofing services are growing more popular with every passing day. 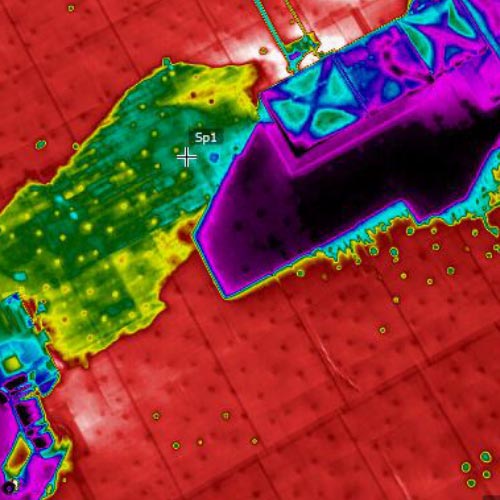 Advantage #4: Drones Are Getting Cheaper

Even as little as a few years ago, drones were devices whose cost prohibited their use outside of major projects conducted by big-name corporations and governments. However, as the technology has become more affordable, the cost of drone inspections has become more accessible to more businesses than ever before. While it is still an investment, the service’s advantages are now something that can be budgeted for even by smaller properties who need to conduct a moisture survey, or locate a leak.

One of the greatest advantages of using a drone is that it keeps a record of everything it sees during its inspection. This means that as long as a thorough scan of a property was conducted, then any number of professionals can look at the footage to determine what’s wrong, and to come up with a plan to fix it. Having those recordings is often more than worth the cost of a drone service in the first place, as they’re a tool with a great deal of potential.

For more information about Moisture Scan Services, and how the use of drones can help your business, simply contact us today!